Theory / RIDING THE WORMHOLE: TIME IN THE ARCHITECTURE OF THE METRO

All architectures have a relationship with time as they do with space. However, in the metro time is so predominant that we could say, if such thing was possible, that the metro is primarily an architecture of time – space being a consequence rather than a purpose. This is especially obvious when considering the metro, which we will later do, as temporal solution to the temporal problem of the city above it. Time in the metro appears then not only specific in itself, but also specific by its profound impact on the time of the city.

Unpredictability of the city

Citizens, by their actions and paths, produce events, and so does the city’s space, constantly evolving as buildings are built or teared down, streets are free or jammed, shops are open or closed. Those events, whether human or urban, influence and react to each other: urban reacts to urban, human to human, human to urban and urban to human, in a relationship that could be compared to Deuleuze and Guattari’s concept of rhizome: it is “acentered, nonhierarchical, nonsignifying system without a General and without an organizing memory or central automaton, defined solely by a circulation of states1”, as opposed to the “tree”, an arborescent system where points originate logically one from the other on a visible structure.

If we consider, in a very broad definition, that human perceive time as relationships between events2, the temporality of the city, made of those rhizome-relationships, is too complex to be grasped, anticipated and controlled. A city is like small piece of clay molded by ten hands, all bustling over each other, pushing fingers as much as dirt, undoing what others have done – and in the end there is never any clear shape but that of unpredictable disorder.

Unpredictability is a major characteristic of the city’s temporality and is now, after the fall of deterministic modernist models, accepted by urban planners even as part of the city’s functions3: we expect from a city to be unpredictable because from its disorder emerge opportunities, encounters, escapes from boredom and solitude – unless you are one of those who likes to find solitude among an anonymous crowd. But as it regulates most urban aspects, unpredictability will also influence the traffic: trips from one place to another are difficult to control in both duration and quality, and congestion therefore never totally avoidable.

The metro addresses that specific problem. It is obviously a fast, underground system, which physically avoids the city so that it has no obstacle but the human fret it loads and unloads every two minutes. But as the crowd fills the metro hallways it brings along the unpredictability from above: the metro architecture has to develop strategies to suppress this tendency and replace it with a different – and perhaps conflicting – kind of temporality.

Permanence of the metro

The unique contact between the metro and the city is where the gate emerges out of the sidewalk, as the tiny extremity of an enormous hidden object. Going down the escalators, down into the ground from one world to another, we change our behavior. We hold the handrail, in line with the crowd, at a regulated speed. We then stand in line when passing, beep – beep!, the ticket gate, and in line again when waiting for the metro, following the marks painted on the platform. In between those steps we find ourselves speeding in large hallways that are oversized for our bodies, but wide enough to contain the rush-hour crowd. No collisions, no jamming, no nothing: this is the reduction of paths to an efficient and predictable flow.

While above the public space is used for almost every human activities – moving, communicating, eating, drinking, observing, sleeping,… – we find the metro hallways all the more large as they are empty of most of these. Chairs and benches are too rare for us to stop and rest. Food and drinks are prohibited, and the places associated with it, so important in the city streets, are absent. Function of the metro public space is reduced to that of moving, passing by. The metro is the means, never the end.

This reduction of function leads to a reduction of social events: if there is nothing to buy or to do, there is less to talk about with strangers. Aside from its actions, it is the composition of the crowd itself that is controlled: the electronic metro card allows a precise monitoring of our entries/exits, and the price of the ticket (two or three times a bus ride) supported by the well-guarded gates are powerful filters that will guarantee a certain homogeneity of the metro population.

Finally, the visual environment, so prolific and heterogenic in Taipei, fades as soon as passing the first escalator. Most stations share the same white, clean, straightforward aesthetic; a result from both their functional homogeneity, and perhaps the need to express the coherence of a large architectural ensemble. A coherence which is only permitted by the relative youth of a network that opened its first line in 1996. Signs therefore serve as the only differentiators between the stations, with a simple primary color code, and English-Chinese names. They also serve as direct mediators between the metro entity and its users: aside from making sure we are on the right path, many texts, videos and recordings will tell us not to eat, drink or chew-gum, not to talk to loudly on the phone, or how protect ourselves if someone tries to stab us.

Station plans are provided at the entrance of each metro station, precisely defining for the user the place and time of the following events.

So the metro is not only physically fast, but by operating a reduction of paths, functions, social encounters and visual forms, it reduces the amounts of events, and unpredictability that emerges from these events. The metro is fast, and reliably so. With such an efficient control of its own temporality the metro is indeed the architecture of time we mentioned earlier. But what is that time made of?

Without the unpredictability from above, it seems that all events left are not only trivial in themselves, but also trivial in their similarity over time and place. It is not simply that the metro is predictable: many types of architecture have predictable temporalities and are still charged with powerful meaning. Temples, for example, sheltering rituals: it is precisely by being played out in a predictable way at a predictable moment that rituals take all their importance. As walls secure us from endless space, programmed cyclic events secure us from the endless of time.

Here however, there is always white walls, always escalators, always normal people, and most of all, there is always a metro coming. No need to check a schedule, to program a departure in time. Metro trips are sequences made of similar events that happen at a similarly undetermined moment. Indistinguishable from each other, happening anytime, all the time, they are not even themselves events. The architecture of the metro is not predictable because there is no event left to predict. It is a space of permanence. Without rupture, or change, it is an architecture of time in which time disappears.

If one day a space traveler wanted to cross the great distances of the universe to reach a faraway star he would need, in order to arrive within his lifetime, to travel faster than light. Faster-than-light travel is of course physically impossible, so physicists imagined the concept of a wormhole: a shortcut linking two distant points of the universe in which spaceships could remain at a normal speed and still arrive on time at destination. But a major side effect would be that, all distances and speeds remaining equal, the time spend in the wormhole must have been shorter than the time spend outside of it: the space traveler would spend a few minutes in the wormhole, but when he’d come out years would have past. By trumping time he would miss his children’s birthday, or their life, or the rise and fall of entire nations.

As we everyday leave the city, the unpredictable rhizome, to go down the tunnel, into a space of permanence where events are so few that time is barely perceptible, part of ourselves must feel like the space traveler riding the wormhole. We know that outside the tunnel a thousand of events happen; we pass under invisible parks, traffic lights, and people who don’t know about us, and when we reemerge a while after, finding back the city, its smells, its sounds (maybe it started raining), we wonder: “what have I missed?”

In Practices of everyday life, De Certeau defines the act of walking in the city as an enunciative function4: we go from place to place, encounter to encounter, and we make up the sequences of events that allow the city to act out its unpredictable narratives. Even though we can never grasp the city in full scale, even though we get lost or we’ve never been to some places, we understand that everywhere the city is able to fill out those narratives, and by doing so it is continuous.

But when riding the wormhole we interrupt the sequence of events from one place of the city to another. We substitute most of these events with those of the metro; we place instead, linking the two extremities of the sequence, the uneventful and empty string that is the metro’s temporality. We link two city places with a permanent void.

For the metro rider, Taipei city is no longer a continuous unpredictable ensemble: it becomes a number of 10mn walk areas surrounding metro stations, each of them attached to a metro line like small buds on their branches. This is how the rhizome is replaced by what Deuleuze and Guattari described as its opposite: the structured, organized, mappable tree.

We use the stations names as common references to define city’s areas, and the metro map as a representation of the city’s scale and temporality: “how many stops to get there?”. De Certeau described us how the panoramas on the top of New-York skyscrapers made the complexity of city readable, “immobilizing its mobility into a transparent text5”. Being underground, the only panorama we have here is the metro map: but it certainly is a magic one, divided in little points, each of them being accessible in a matter of minutes.

So the metro, the wormhole with its alien temporality, becomes in our minds the only continuous architecture organizing the discontinued architecture of Taipei. At each station exit, we’ll find a little piece of the city: like a small room standing at the end of a building’s hallway. A building whose powerful yet twisted temporality allowed him to dismantle then contain another. 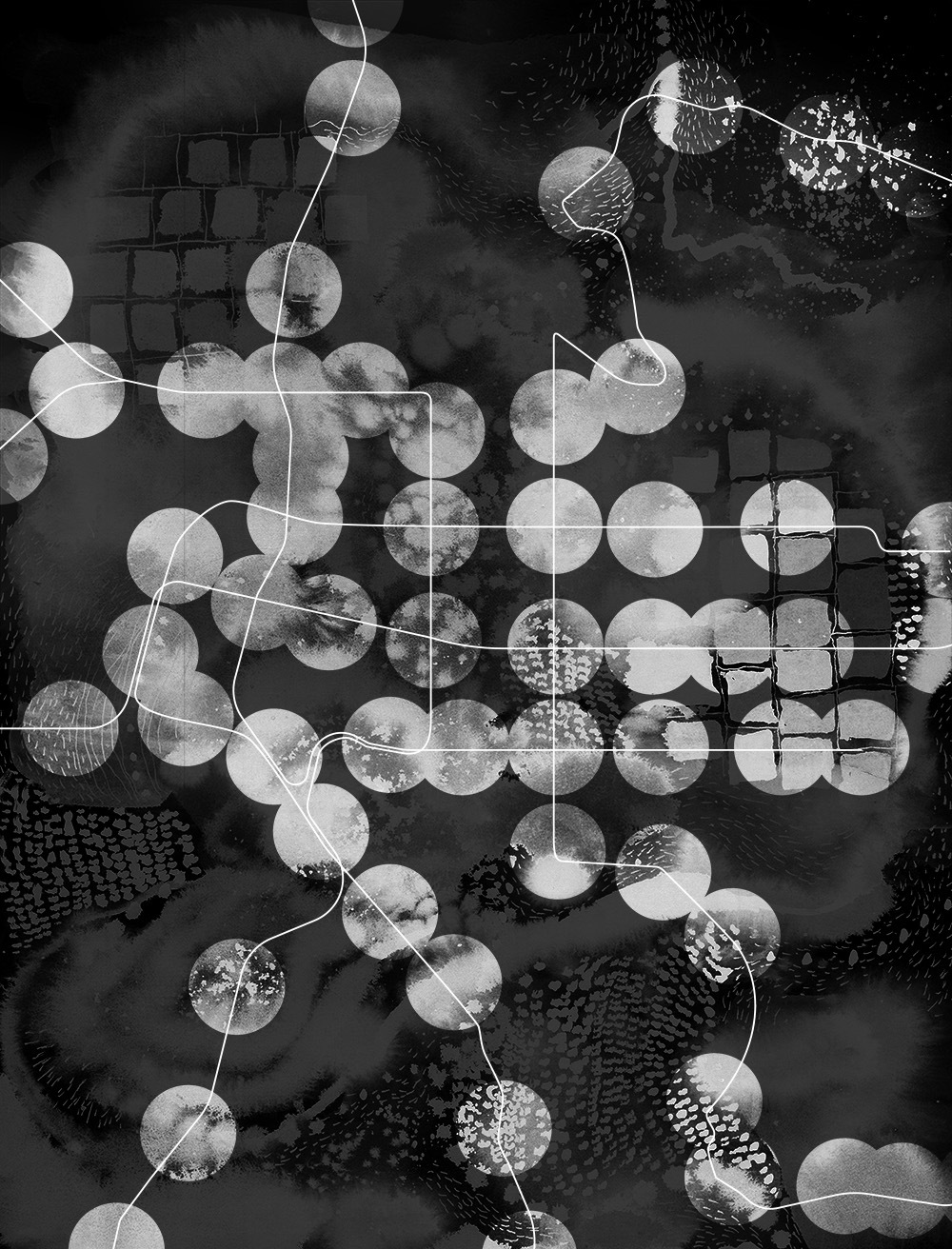